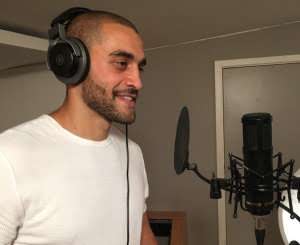 Let’s be honest, if I said conscious rapper or political hip-hop, a half Iraqi half English man would be the last thing that would come to your mind. I bring this up not only to inform you of an artist who is undoubtedly one of the sharpest minds and arguably one of the most vicious on the mic. Ultimately, with all that talent he’s the best you’ve never heard of.

Becoming a fan of this man back when I first heard him in 2011, I was intrigued by the brashness of his lyrics. First hearing him on a song called “Voice of the Voiceless” with Immortal Technique, I was shocked and held in awe when I heard his first lines, “From the West 10 to the West Bank, I write righteous rhymes in my right as I wrestle the devil with my left hand. Never worked for a Zionist, Never been a yes man, My art is like Rembrandt painting pictures of death camps.” For someone to even address Palestine or focus on issues and histories spanning Africa through the middle east and even touching on south Asia, Australia and speaking on Tasmania shows how global hip hop has become, especially as an outlet for people who’s voices have been stripped otherwise.

After listening to his first album, “Soundtrack to the Struggle” 2011, I had anticipated much more to follow, then suddenly he seemed to disappear from the scene. Kareem Dennis, his given name, removed himself from the industry and attended University, where over the next 10 years he has worked on a PHD in History. Rumors of being arrested and blackballed by the industry for his politics is hinted on by the man himself, but giving little teasers around 2017 I had a feeling he’s be returning although another album seemed like wishful thinking. Then the tragedy of the Grenfell tower fire occurred. Lowkey being a resident of that area tried to help along with countless others but ultimately used his most powerful weapon in the midst of the trauma…his voice and pen. “Ghosts of Grenfell” his a deep and somber eulogy to all victims of that day, using survivors from the fire as participants in the video its Lowkey himself who doesn’t appear which adds to its effect. From there came “Children of Diaspora” followed by “Ahmed” which is hard to view with the lyrics combined with the images then closing out with a Jeff Dunham clip which blatantly shows the western view of brushing the bigger issue off with an arrogant attitude. “Lords of War” tells a story from the perspective of a drone strike from the perspective of both the child victim/target to the man behind the screen controlling it with singer Kaia creating a chorus that is haunting. Other freestyles turned themselves into songs that are extremely well produced.

Over the years, Lowkey’s delivery has become much sharper as his writing has become 100 times more potent as his word choices hit harder now. Now this isn’t for everyone, there’s no mention of the usual pageantry that accompanies most mainstream artists, if mentioned at all, Lowkey hangs em high and leaves them out to dry. His accent can disconnect the listener on a first listen, but once your ear adjusts if youre craving knowledge and viewpoints on issues you may not think much about you can’t go wrong with this release. Love him or hate him, isn’t really an issue, but whichever side of that fence you stand neither side will be able to claim thew mans not talented nor intelligent which is the deadliest mix, especially when it comes to being an MC.